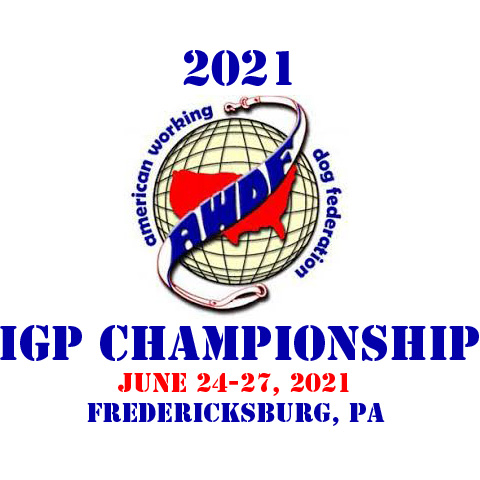 Welcome to the 2021 AWDF Championship

OG Keystone, Hawaii Working Dogs, Unified Canine, and New Age Tri-State, the host clubs from the WGSDPA, DVG, AWMA and UDC would like to welcome one and all to the 2021 AWDF IGP Championship. Thank you for visting the 2021 AWDF National Championship Website. The Championship will be held in Central Pennsylvania June 25 - 27, 2021. The titles being offered are IGP1, IGP2, IGP3, GPr1, GPr2 and GPr3. Event Flyer | Flight Schedule

We are grateful that the judges, helpers, tracklayers, stadium volunteers and competitors have chosen to participate in and support this Championship and will do our best to ensure that it is run fairly and competently.

Towards such an end, please note that the AWDF Championship Platform consists of a National Events Committee which selects the host club from amongst the bids to host and also, selects two judges while the selected host club selects the third judge; a separate Helper Committee that selects the helpers from the national level applicant pool and that the Phase C (Protection) Judge assigns the helpers amongst IGP 1, IGP2, IGP 3 (front) and IGP 3 (back) on the basis of a tryout. The Tracking Coordinator and Tracklayers are approved by the Executive Board.

Through such a process, which involves numerous qualified individuals and a demarcated but inter-related process, the AWDF believes that transparency and fairness can be ensured. The AWDF appreciates and understands the amount of time the competitors have put into their training with their canine partner, and therefore, our commitment to fairness and competence is paramount and something we believe each and every competitor is owed.

We are also grateful to the Northern Lebanon High School for allowing us to utilize its wonderful premises and the local landowners who have graciously allowed us to use their fields for the scent detection component of the competition.

The American Working Dog Federation was established on June 17, 1989 in order to promote awareness and appreciation of all working breeds and the various applications that test the temperament and trainability of the canine vis a vis the handler. This Championship will focus on International Gebrauchshund Prufung ("IGP") under the rules of the FCI (Federation Cynologique Internationale). The AWDF embraces herding, mondio ring and the breed standard of the canine's home country of origin as well.

We look forward to welcoming you to the 2021 American Working Dog Federation Championship and wish all competitors the best of luck. The judges, tracklayers, helpers and support staff will be ready. THANK YOU.

here to support our IGP and FH World Teams!